‘A crane reminds him of the Song Dynasty poet, Lin Pu, a recluse and crane fancier who calls cranes his children – a somber bird, Ming Dynasty’s ill fated Pa Da Shan Ren or Zhu Da. who painted and drank his royal life away, saddened by the politics of the Dynasty. “His birds were arrogant, sad and defiant.”(TC. Lai)

So much has been written on Ding Yanyong, from scholars of art to authors, critics and adored students. His life can be read in many publications from Commercial Galleries where he exhibited to Museums and Government Art Galleries.

His works have been collected by hundreds of students and collectors, now worldwide, but there was a time when he gave his works to his best student and friend, Mok E Den of Hong Kong to sell them to anyone as he needed finance. If only I knew him then!

I attended an exhibition of Chinese Art at the Chinese Department, University of Melbourne, headed by Professor Harry Simon in the 1970’s. It included Ding Yanyong’s one painting, of a bird. It struck me as someone, so comical and simple, inferring a subject more serious, symbolic of certain human conditions. A crane reminds him of the Song Dynasty poet, Lin Pu, a recluse and crane fancier who calls cranes as his children – a somber bird, Ming Dynasty’s ill fated Pa Da Shan Ren or Zhu Da, who painted and drank his royal life away, saddened by the politics of the Dynasty. “His birds were arrogant, sad and defiant.”(TC. Lai)

Ding, came to Melbourne Australia on our invitation to exhibit his paintings. He could not speak much English but fortunately, I could speak Cantonese. There were no hotels in 1975 with Chinese staff, so he stayed with me.

One morning he was excited by a rare sound near the house, saying, “even the birds in Australia know my name. They keep calling me Ding, ding and ding,” the call of the bell birds in the bush, it made him so happy!

That year 1976 he demonstrated his art in the National Gallery of Victoria, to a fascinated and skeptic mixed crowd of art lovers. At the conclusion, they were stunned by him and his chain-smoking performance. He never spoke, just painted for an hour, after which he demanded Australian ice-cream to cool him. He donated some paintings to the Gallery. That year he sold out two Exhibitions of works, in Melbourne and Sydney but it had no effect on him, he just loved to paint. At dinner or lunch he would scribble on napkins, even the  tablecloth, while he talked, and I never salvaged any of them!

His subjects varied from ludicrous, opera figures to Buddhist monks, world weary warriors to gigantic landscapes and the birds and flowers theme. But most inspiring of all were his 1-pi works of cranes, cats, rabbits and rarely figures. 1-pi painting means using ink and brush to paint a subject with only one line, without ever lifting one’s brush off the paper, till accomplished. The ink has to last and not run out or the single line be broken. Ding’s Crane was most extraordinary and so accomplished, it is difficult to fault.

Today I wonder what Ding would think of the prices, he is achieving in auction, in Japan, Hong Kong, China, America, Europe and Australia. The National Gallery of Victoria boasts a collection, with gratitude to  Jason Yeap of Mering Corporation Ltd. who recognised Ding’s talent and donated many works.

Ding Yanyong has a niche in 20th/21st century of Chinese Art. 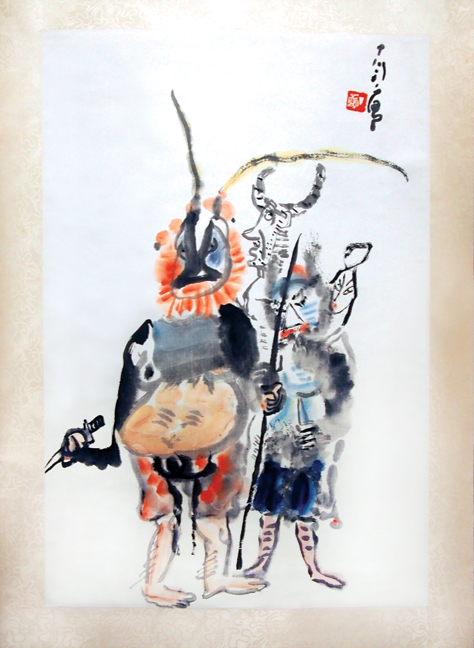 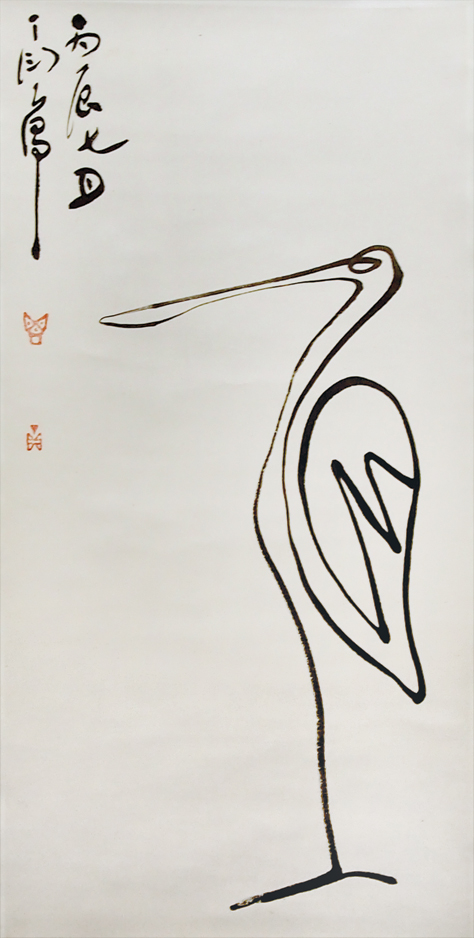 This article was extracted from ezaustralia.news