Apollo 11 memorabilia goes up for auction

Auction houses are looking to cash in on the nostalgia of the Apollo 11 lunar landing. 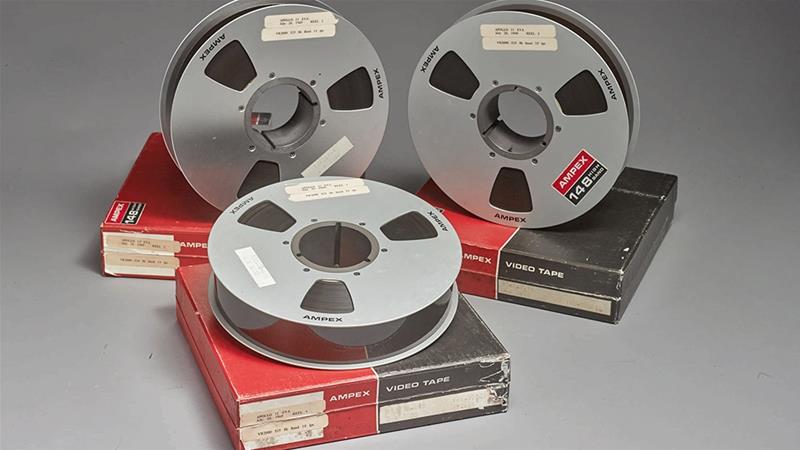 In celebration of the 50th anniversary of Apollo 11 landing on the moon, international auction house Sotheby's will place three recordings of the historic mission under the gavel at an auction in New York City [Courtesy/Sotheby's]

In June 1976, Gary George, an engineering student and intern at NASA, purchased a lot of more than 1,100 videotapes at a government surplus auction for $217.77.

This Saturday could see three of those tapes sell for millions of dollars.

The three tapes - which George unwittingly rescued for posterity - were original recordings of the Apollo 11 lunar landing's extravehicular activity (EVA) - operations performed by astronauts outside a spacecraft.

The videos are the centrepiece of an auction of space memorabilia that is being held at Sotheby's in New York City and that is timed to coincide with the 50th anniversary of the Apollo 11 moon landing on July 20th.

Sotheby's describes the George tapes as "the earliest, sharpest and most accurate surviving video images of man's first steps on the moon".

Not to be outdone, rival auction house Christie’s is also looking to leverage lunar-landing nostalgia on Wednesday with the auction of Apollo 11’s Lunar Module Timeline Book, the manual used by the astronauts to land on the moon and return safely back to Earth. 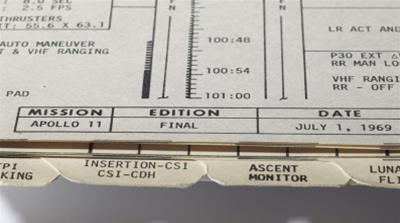 Still, opinions differ among collectors about how to value space memorabilia.

Putting a price on history

George's tapes were recorded at the Manned Spacecraft Center, now the Johnson Space Center, in Houston, Texas. They were not directly recorded from data transmitted from the moon, but from feeds sent by three ground stations that had downlinked the Apollo 11 data and converted it into a format fit for broadcast television.

“They are a copy of the final broadcast signal, not the original data received from the moon and not something that was used by NASA to carry out the rest of the flight," Pearlman, the founder and editor of collectSPACE.com, told Al Jazeera.

In the lead-up to the Sotheby's auction, NASA noted in an article that "if the [George] tapes are as described in the [Sotheby's] sale material, they are 2-inch videotapes recorded in Houston from the video that had been converted to a format that could be broadcast over commercial television and contain no material that hasn't been preserved at NASA."

Pearlman believes George's videotapes are not the type of items that a museum - such as the Smithsonian National Air and Space Museum in Washington, DC - would put on display.

“They aren’t an artifact in that regard,” he explained. “They are potentially a research or archival asset, but other, similar reels exist in other archives.”

Not all space memorabilia specialists agree with Pearlman's assessment.

“The value of these tapes is in the improved video quality of one of humanity's greatest achievements,” Steve Zarelli, founder of Zarelli Space Authentication, told Al Jazeera.

“NASA or the Smithsonian has a responsibility to go after these tapes hard," Zarelli added. "If they are won by a private collector, hopefully he or she loans them to the Smithsonian to make a digital copy of the better video footage.”

This year will be the third one in a row that Sotheby’s has held an auction dedicated to space memorabilia. The fine art and collectibles broker is putting a number of items on the block Saturday. In addition to the George tapes, other notable lots include an Apollo 11 checklist sheet used on the lunar surface and other documents culled "directly from the personal collection of Apollo 11 lunar module pilot Buzz Aldrin".

“The last time he [Aldrin] offered an item for auction was in 2007," Cassandra Hatton, vice president and senior specialist with Sotheby’s New York, told Al Jazeera. "He held on to the best documents and decided since it’s the 50th anniversary, it’s time for someone else to own these.”

Though the Apollo 11 mission was manned by Americans, both Sotheby's and Christie's say enthusiasts across the world want to own a piece of what is regarded as a milestone for humanity.

“While it was an American crew aboard the Apollo 11 mission, the first lunar landing was truly a human achievement and interest in these artifacts extends across the globe," Christina Geiger, the head of the books and manuscripts department at Christie’s, told Al Jazeera.

No matter the winning bids when the gavels fall, space history buffs say society owes a debt of gratitude to private collectors for their role in preserving space history.

“I'd prefer to see them [the George tapes] in a museum to ensure archival handling for posterity, but if the owner bought it legally decades ago, he has every right to maximise his investment,” Zarelli said.

“Many private collectors also strive to share their collections with the public through online and real-life exhibits," said Pearlman. "They contribute to the research being done by curators and conservators about the history and preservation of space hardware."

Above article is extracted from www.aljazeera.com